Warning: This app may give you a serious case of wanderlust.

So, I’ve been playing around with Facebook’s TripAdvisor app, since the Where I’ve Been app has been so unceremoniously discontinued.  (You can see a picture of the old app on my About page.) On the whole I like the new app.

I can see all the cities where I’ve been/ want to go:

I can select only the cities where I’ve been: 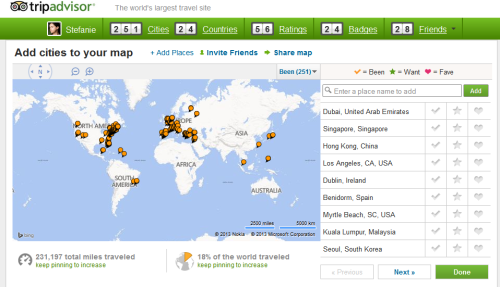 Or only the cities where I want to go: 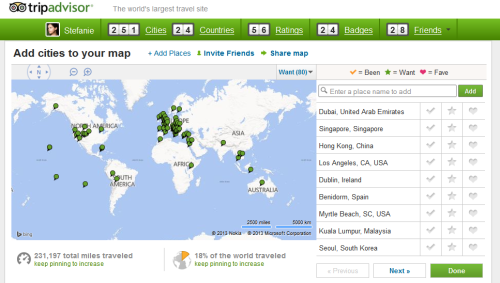 And my favorite cities.  Funnily enough, they’re all in the same corner of the world:

Whereas the old app (Where I’ve Been) filled in the entire country if you’ve visited it, this map just pins specific cities.  This is good and bad.  It gives you a new perspective on your travels.  Before, I was more focused on going to new countries just so I could fill in more of my map.  Now I realize that I primarily want to see more cities in countries where I’ve already been — England, France, Italy, Spain, etc.  This app has severely increased my wanderlust!  It’s also forced me to think about all the cities and towns I’ve ever visited, which has been a nice trip down memory lane.

One thing I don’t like about these apps is that they tend to turn traveling into a game or competition. I can see where all my friends have been, and my first impulse is to see whether I’ve “beaten” their country count.

I also found a bug in the app.  It’s saying I’ve been to a place called Bangko, Indonesia – which I never was – and I can’t get it off my map!  It’s been bugging me, since it’s throwing my city and country count off.  Anyone know how to fix this?